Like many villages, Desford is now substantially congested by a large number of parked cars on many of the through routes. Many of these are parked quite legally but sometimes the situation is exacerbated by inconsiderate parking such as occasionally occurs at the Co-op Store at the top of Peckleton lane.

Our local shops need to keep their supplies topped up on a daily basis, so these medium sized delivery vehicles also add to the existing congestion.

HGVs are not allowed through the centre of the village, but we are aware of a number of violations which have caused huge congestion and in some cases damage to buildings and to street furniture. Both Neovia and Caterpillar take this situation very seriously and have now adopted a “2 strikes and you’re out policy” to both supplier companies and their drivers. It is known that a contributory cause has been the use of domestic satnavs (that don’t give weight restrictions) and the more expensive commercial satnavs (that do implement weight restrictions). Caterpillar and Neovia both insist that their suppliers use commercial satnavs.

The situation with HGVs has improved in early 2017, but any further violations should be reported immediately to the Parish Council. 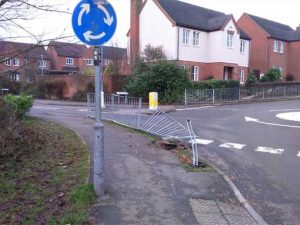 A section of railing was ripped out and carried from the mini roundabout at the south end of Leicester lane as far as the Bluebell Pub.